THE STORY OF THE GOLDEN CUCKOO 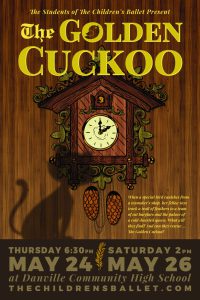 An evil spell has been cast upon a princess, turning her into a cold-hearted Queen Bird. She now considers herself to be the most beautiful bird in the land. One day, however, while admiring herself in the royal mirror, the mirror shows her a new, more beautiful bird: a Golden Cuckoo. The Queen sends her cat burglars to steal this new threat for the Queen’s collection.

At a nearby village toy shop, the shopkeeper awaits for her housekeepers to tidy following the day’s business. She sends them off and puts away the toys for the night. She delights in her Cuckoo Clock and watches the figurines dance. The Cat Burglars sneak into the shop to steal the cuckoo for the queen. As the clock strikes midnight, the figurines discover their precious friend is gone – but has a left a feather trail. They set out on a rescue mission.

Searching for answers, the figurines meet Gypsies in the forest, who tell them three magic potions must be found to end the evil spell on the Queen Bird. Bunnies, fairies, dragonflies, imps, flowers, and even the wind, all help the figurines get the potions. The Cat Burglars arrive with the Cuckoo at the palace, much to the delight of the Queen and courtiers. Her yellow, blue, and red birds, and her prized swan, all dance to entertain the Queen. The figurines arrive and slip the potion to the queen, who is transformed back to a lovely and kind princess. She happily grants freedom to all the captive birds, especially to the Golden Cuckoo.